The central myth created by centuries of colonial rule is the idea that the West – the colonizer — is advanced and developed, while the East, the colonized, is primitive and backwards. Belief in this myth is created by propagating a large number of lies, which are asserted as being truths, and come to be widely believed. An easy to understand example of this phenomena — how lies become known and accepted as truths — is the recent American invasion of Iraq. This was justified on the grounds that the Americans were doing this to bring democracy to the Iraqi people, to liberate them from an evil dicatator, and to protect the world from the threat of Weapons of Mass Destruction in the hands of a madman. These lies were spread skillfully using a heavily funded propaganda campaign to convince the public of their truth, in order to create public approval for the attack. The reality was that the US wished to gain control of the vast reserves of Iraqi oil. The reality of what happened in Iraq after the US Invasion has no match to the propaganda. The people, who were living in one of the most advanced, developed and modern economies of East, were bombed back to the stone ages. A country wide carpet bombing campaign was carried out, which destroyed schools, hospitals, factories, power plants, and all infrastructure of the country. One million civilians were killed, millions were made homeless and jobless, and the entire population of 40 million was subjected to an un-imaginably terrible calamity, as a functional country was completely destroyed. What Hitler did to the Jews, which is among the most well-known great crimes of the twentieth century, has been topped by what the Americans have done to Iraq in the twenty first century. However, while Hitler’s name is mud, nobody considers Bush and Blair as mass murderers who brazenly lied to their own citizens, and the world at large, to attack and kill, without any justification, one million innocent civilians, and ruin the lives of the remaining 40 million.

Because of the success of propaganda at hiding realities, people like Hassan Nisar keep singing praises of the wonders of the Western civilization, and of their great character and conduct, of their humanity and compassion, and all the great qualities. At the same time, if a handful of Muslims commit barbaric acts of terrorism, this is painted as the greatest problem the World faces, and something for which all Muslims are responsible.  It is the DISPARITY between the reality (of killing millions for control of oil) and the image (of doing service to Iraqi people and to mankind) that is the subject of this essay.

The name of White Man’s Burden, based on a Rudyard Kipling poem, is given to this myth, which continues to be widely believed, both by White Men and by Brown and Black Men all over the world. According to this myth, White Men developed an advanced civilization, fantastic scientific and techological achievement, democratic governance, humanity, compassion and enlightenment. Then they looked around and saw that while they had all these great things and stood at the apex of civilization, the rest of humanity was far behind them, trapped in depths of ignorance and darkness.  They felt that they had a responsibility to share the benefits of their advanced civilization with the rest of world, so they abandoned the comfort and luxury of their homes and spread throughout the world with the mission of civilizing the rest of the planet. Their conquest of the globe was not motivated by selfish reasons, but was for the sake of a greater cause and a noble mission to bring enlightenment to the entire planet.

The myth of the White Man’s burden — also known as the myth of benign colonization — is exactly like the cover story of the Iraqi invasion. Very high and noble purposes are asserted for a very savage and barbaric act. Europeans conquered the globe not for the benefit of the natives, but in order to loot and pillage the treasures from all over the world. They became rich by looting the world, and the rest of us became poor due to the destruction of our societies and the extraction of all wealth, which was shipped to the colonizers. The causes of the “development” (which just means being rich) of the West and the causes of “backwardness” (which just means being poor) of the East are just opposite sides of the same coin — If I rob you, I will become rich and you will become poor (for historical evidence and details, see L S Stavrianos: Global Rift, The Third World Comes of Age).  In order to counteract this myth, the false image of colonization being done for the benefit of the natives, to educate and civilize them, it is necessary to expose the realities of the amazingly savage and barbaric acts of cruelty, massacres, genocide done in the process.

Deeply racist Cecil Rhodes (1902) declared that: “We are the finest race in the world and that the more of the world we inhabit the better it is for the human race. Just fancy those parts that are at present inhabited by the most despicable specimens of human beings; what an alteration there would be if they were brought under Anglo-Saxon influence … ” According to the imperialist narrative, Rhodes took up the “White Man’s burden,” suffering exile, and struggling and sacrificing to bring the benefits of civilization to the savages of Africa. The fortune that he acquired, which funds the Rhodes scholarship, was only an incidental side-effect. Numerous statues, plaques, buildings bearing his name, honor the remarkable achievements of one of the national heroes of England.

An altogether different narrative is available from former Rhodesians, who re-named their country as soon as they could do so. The Pan Africanist Congress in January 2002 argued that “the problems which were being blamed on [President Robert] Mugabe were created by British colonialism, whose agent Cecil Rhodes used armed force to acquire land for settlers”. Rhodes “preferred land to niggers” and acquired a fortune using immoral and unscrupulous methods. He used this fortune to fund a private invasion of East Africa. He bought newspapers in order to shape and control public opinion. He brokered secret deals, issued bribes and used gangs of mercenaries to butcher his opponents, seizing close to a million square miles of territory from “despicable specimens”, i.e. the native inhabitants.

Leopold II King of the Belgians (see King Leopold’s Ghost for detailed history), privately controlled and owned the Congo Free State from 1885 to 1908. In 1908, the area was annexed by Belgium as a colony known as the Belgian Congo. Leopold used his personal control to strip the county of vast amounts of wealth, largely in the form of ivory and rubber. These labor-intensive industries were serviced by slave labor, and the local peoples were forced to work through various means, including torture, imprisonment, maiming and terror. Families were imprisoned, to force people to work, and their hands were chopped off if they failed to meet their quota. Some 10 million Congolese were killed — again, more than Hitler —  On top of all this, it was advertised as being a Christian charity in order to teach lazy Congolese work ethics!

Winston Churchill: Leaders of the British Empire were responsible for nearly 30 million deaths in India, far worse than Hitler and Stalin. What is important here is how they continue to be honored and revered. Although the truth is slowly coming out about the realities of the British Empire, it is strongly resisted by both Browns and Whites who have been brainwashed into believing in the GREATNESS of the Western Civilization.   Winston Churchill was a  ruthless exponent of Empire.  Many of his most brutal deeds are documented in Professor Caroline Elkins’s book, ‘Britain’s Gulag: The Brutal End of Empire’.  The tactics condoned by Churchill, the Colonial Secretary, to crush aspirations for independence and freedom included the most vile methods of torture such as electric shock treatment and burning with cigarettes. Churchill saw local Kikuyu as ‘brutish children’ . That racism marked too his dealings in India and the Middle East where he regarded the Palestinians as ‘barbaric hordes’.

Just to show that this is not something that onlyh used to happen in the past, Gina Haspell, widely known as The Torture Queen, has just been chosen to head the CIA, and has been praised by Trump, who also believes in torture.

Below I reproduce an Article by Independent: Five Worst Atrocities of the British Empire 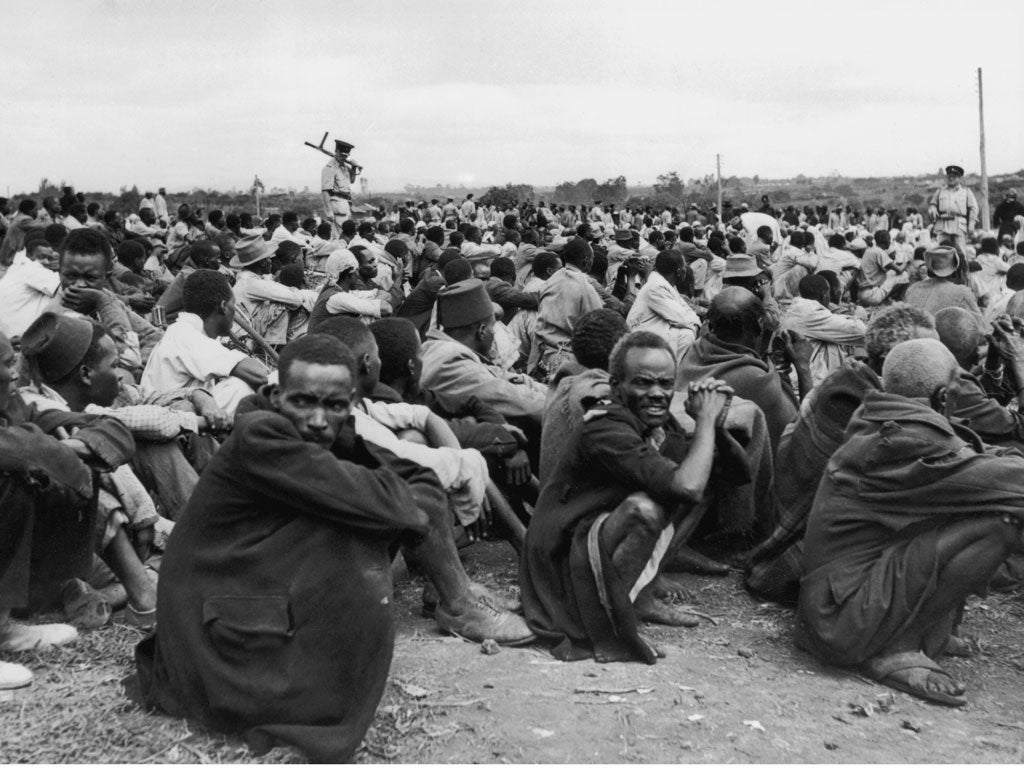 British people are proud of colonialism and the British Empire – poll

Although the proponents of Empire say it brought various economic developments to parts of the world it controlled, critics point to massacres, famines and the use of concentration camps by the British Empire.

During the Second Boer War (1899-1902), the British rounded up around a sixth of the Boer population – mainly women and children – and detained them in camps, which were overcrowded and prone to outbreaks of disease, with scant food rations.

When peaceful protesters defied a government order and demonstrated against British colonial rule in Amritsar, India, on 13 April 1919, they were blocked inside the walled Jallianwala Gardens and fired upon by Gurkha soldiers.

The soldiers, under the orders of Brigadier Reginald Dyer, kept firing until they ran out of ammunition, killing between 379 and 1,000 protesters and injuring another 1,100 within 10 minutes.

Brigadier Dyer was later lauded a hero by the British public, who raised £26,000 for him as a thank you.

In 1947, Cyril Radcliffe was tasked with drawing the border between India and the newly created state of Pakistan over the course of a single lunch. After Cyril Radcliffe split the subcontinent along religious lines, uprooting over 10 million people, Hindus in Pakistan and Muslims in India were forced to escape their homes as the situation quickly descended into violence.Some estimates suggest up to one million people lost their lives in sectarian killings.

Wolpert: Shameful Flight, The Last Yearsof the British Empire in India – places the blame for the catastrophe largely on Mountbatten, the flamboyant cousin of the king, who rushed the process of nationhood along at an absurd pace. The viceroy’s worst blunder was the impetuous drawing of new border lines through the middle of Punjab and Bengal. Virtually everyone involved advised Mountbatten that to partition those provinces was a calamitous mistake that would unleash uncontrollable violence. Indeed, as Wolpert shows, civil unrest among Muslims, Hindus, and Sikhs escalated as Independence Day approached, and when the new boundary lines were announced, arson, murder, and mayhem erupted. Partition uprooted over ten million people, 500,000 to a million of whom died in the ensuing inferno.

Thousands of elderly Kenyans, who claim British colonial forces mistreated, raped and tortured them during the Mau Mau Uprising (1951-1960), have launched a £200m damages claim against the UK Government.

Members of the Kikuyu tribe were detained in camps, since described as “Britain’s gulags” or concentration camps, where they allege they were systematically tortured and suffered serious sexual assault.

Estimates of the deaths vary widely: historian David Anderson estimates there were 20,000, whereas Caroline Elkins believes up to 100,000 could have died.

Between 12 and 29 million Indians died of starvation while it was under the control of the British Empire, as millions of tons of wheat were exported to Britain as famine raged in India. (this number is far higher than the Jews killed by Hitler)

In 1943, up to four million Bengalis starved to death when Winston Churchill diverted food to British soldiers and countries such as Greece while a deadly famine swept through Bengal.

Talking about the Bengal famine in 1943, Churchill said: “I hate Indians. They are a beastly people with a beastly religion. The famine was their own fault for breeding like rabbits.”

An interesting article shows how the papers detailing these dirty secrets were destroyed as the British empire ended, to prevent anyone from learning about them: